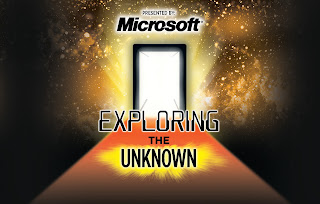 Despite frequent claims to the contrary, I’ve come to believe that people love the unknown. Why else in every horror movie do people go into the big scary house or the rooms from where creepy noises emanate? They can’t help it.

Regardless of fear, insecurity, or basic self-preservation, people frequently push the envelope anyway and are willing to do things they never thought in their wildest dreams they would ever do. Take me for example. I have an incredible fear of open-air heights, yet there I was, somehow freefalling at 120 miles per hour from three miles up with only a parachute to save me.

The theme for ciWeek 9 (Celebrate! Innovation Week) is “Exploring the Unknown,” and the amazing line-up of speakers will challenge us to stop accepting the status quo and look at the world and the universe in new ways. I believe the most meaningful approach to storytelling is direct interaction with the people who are the stories: current, living creators of new ideas and developers of the latest innovations. Through engagement with the “who behind the what,” the stories come alive and create an emotional impact.

What started in 2009 as a simple idea to inspire people through firsthand exposure to the “people who are the stories” of imagination, creativity, and innovation has grown from a single speaker to a dozen for 2018. This year’s line-up includes:

Josh Gates is an archeologist, adventurer, television personality, and author. As host of the Travel Channel Series Expedition Unknown, Gates takes viewers around the world on thrilling investigations of everything from Amelia Earhart’s disappearance to a search for the Ark of the Covenant to lost Incan cities to a hunt in Siberia for Mammoth tusks to be used for DNA cloning.  He has also hosted Destination Truth and Ghost Hunters Live, television shows where the paranormal, remote corners of the planet, and a search for the Yeti are among his daring and entertaining expeditions.

Jonathan Frakes is an actor, author, and director, best known for his role as Commander William T. Riker in the television series Star Trek: The Next Generation, a role he also played in several films while serving as director. Recent directing credits include: Star Trek: Discovery on CBS and the new Fox dramedy starring Seth McFarlane called The Orville. Frakes can also be heard as the narrator on the animated series Marvel’s Guardians of the Galaxy.

Kenny Aronoff is one of the world’s most influential and in-demand drummers. Rolling Stone Magazine named Aronoff one of the 100 Greatest Drummers of all time. He’s spent 17 years with John Mellencamp playing the unforgettable tumble that leads into the chorus of Jack and Diane.  He’s also kept the beat for The Rolling Stones, Bruno Mars, Lady Gaga, Bob Dylan, Paul McCartney, and many more. His presentations include live performances, entertaining anecdotes from his rock star life, and tips for success.

Dr. David Gallo is the world’s leading expert on ocean exploration. He was one of the first scientists to use robots and submarines to explore the deep sea floor. He was leader of the successful international effort to find the wreck site of Air France 447, and he co-lead explorations of the wrecks of the RMS Titanic and the German Battleship Bismarck. His TED presentation, Underwater Astonishments, has more than 8 million views.

Dr. Nathalia Holt is a science writer and the New York Times bestselling author of Rise of the Rocket Girls: The Women Who Propelled Us from Missiles to the Moon to Mars and of Cured: The People Who Defeated HIV. Her work has also appeared in numerous publications including The New York Times, The Los Angeles Times, The Atlantic, Slate, Popular Science, and Time.

Rob Manning is the chief engineer for NASA’s Jet Propulsion Lab (JPL) Engineering and Science Directorate. He has been designing, testing, operating, and managing robotic spacecraft for over 35 years, including Galileo to Jupiter, Cassini to Saturn, Magellan to Venus, and Pathfinder and Curiosity to Mars. Manning has received four NASA medals, is in the Aviation Week Magazine Space Laureate Hall of Fame at the Smithsonian Air and Space Museum, has received two honorary PhDs, and has a minor planet named after him.

James Barrat is an author and filmmaker. His book Our Final Invention: Artificial Intelligence and the End of the Human Era started a national conversation about the dangers of artificial intelligence. His films provoke viewers to think about the machines whose intelligence could overtake our own and what would happen if we had to rely on their “kindness” to survive.

Dr. Jill Pruetz is a professor and primatologist. Her studies of non-human primates such as chimpanzees, spider monkeys, and howling monkeys have led her to conduct fieldwork in Peru, Costa Rica, Nicaragua, Kenya, and Senegal. Supported by the National Geographic Society and the National Science Foundation, Pruetz focuses her research on the influence of ecology on primates and the implications her findings might have on early human feeding and social behavior.

Jill Heinerth is a diver, adventurer, and sea hero. Heinerth has explored deep underwater caves, never-before-seen ecosystems, and the inside of Antarctic icebergs. The Hall of Fame diver encourages audiences to challenge the unknown and overcome fears. Heinerth, who has received awards shared by other underwater greats as Jacques Cousteau and Robert Ballard, was named a “Living Legend” by Sport Diver Magazine.

Rod Pyle is an author, journalist, historian, futurist, and filmmaker. He has written 11 books on space history, exploration, and development, including Innovation the NASA Way and Destination Mars. Pyle has also produced, directed, and written several episodes for History Channel’s Modern Marvels as well as a documentary for History Channel entitled, Beyond the War of the Worlds.

Rob Wolfe is a lifelong “picker” of antiques and original paint cars and trucks. He is the brother of Mike Wolfe of History Channel’s hit reality show American Pickers. Rob can often be seen on the show traveling the country and digging through old barns and garages looking for what he calls, “rusty gold.”

Gabor George Burt is an internationally recognized expert in innovation, creativity, and strategy development. The sought-after speaker is author of Slingshot: Re-Imagine Your Business, Re-Imagine Your Life and many other books on successful growth strategies.

ciWeek 9 will be held from March 5-8, 2018 at the Des Moines Area Community College West Des Moines Campus. For more information and to view the video trailer for the coming event, please visit www.ciWeekExperience.com.

by Dr. Anthony Paustian Author of  A Quarter Million Steps I grew up watching the The Jetsons, a futuristic television cartoon created by Hanna and Barbara in the early 1960s. As George Jetson and his family traveled around in flying vehicles while living and working in buildings that seemed to float in the sky, it was easy to think that anything representing a total paradigm shift from current life had to be light years into the future. However, I recently attended the Experimental Aircraft Association’s annual AirVenture in Oshkosh, Wisconsin. The largest air show in the country, AirVenture was loaded with state-of-the-art military and civilian aircraft and even modern, private sector rockets such as Jeff Bezo’s Blue Origin. But it was the smaller, more experimental aircraft that fascinated me. Despite my Air Force years on fighters (F-111s to be specific - now appearing in museums), I found myself repeatedly drawn to these very personal flying machines the entire week I wa
Read more

Bolts from the original Launch Umbilical Tower (LUT). I’m a collector of sorts, especially when it comes to Apollo memorabilia. There’s something about being surrounded by these artifacts that ignites and inspires my creativity. While window shopping an online space auction recently, something grabbed my attention––two large bolts including washers and nuts. Though most people probably wouldn’t get too excited about a couple of bolts, these were special, as they were part of the original Launch Umbilical Tower used to launch the Saturn V rockets to the Moon. The bolts were huge, about eight inches in length, weighed about five pounds each, and still had portions covered in the original orange-red paint. Seeing these bolts got me thinking about everything that went into putting a man on the Moon. While we celebrate the 50th anniversary of those missions, the focus tends to be on the astronauts as heroes in the same way they’re portrayed in films like  First Man ,  Apollo 13 , an
Read more

In March, we lost an Apollo astronaut, a beloved member of the space community, and in my own case, a personal friend––Al Worden, the Command Module Pilot for Apollo 15. To those who knew him, his passing may have come as a bit of a shock, especially in light of his outgoing personality and unlimited energy despite his advanced age. Al and I became close later in his life. While visiting him last fall at his home in Houston, I assumed we would simply do what we always did––talk space, but also discuss family and politics, while eating out for every meal, as was our routine. This trip was different. While we did dine at restaurants, Al decided he wanted to make dinner. Despite my telling him it wasn’t necessary, he was determined, and there was no altering his trajectory once it was set.   While he prepared the lavish spread of steak, potatoes, asparagus, and dessert, I could only watch as he wanted absolutely no help. At that moment, I realized here was one of my personal heroes, a glo
Read more

Dr. Anthony Paustian
Dr. Paustian has authored four books including "A Quarter Million Steps," which won seven international and national literary awards for best book in the areas of leadership, motivation, and success. Dr. Paustian holds graduate degrees in business administration and design management, as well as a Doctorate in Educational Psychology.