In March, we lost an Apollo astronaut, a beloved member of the space community, and in my own case, a personal friend––Al Worden, the Command Module Pilot for Apollo 15. To those who knew him, his passing may have come as a bit of a shock, especially in light of his outgoing personality and unlimited energy despite his advanced age.

Al and I became close later in his life. While visiting him last fall at his home in Houston, I assumed we would simply do what we always did––talk space, but also discuss family and politics, while eating out for every meal, as was our routine. This trip was different. While we did dine at restaurants, Al decided he wanted to make dinner. Despite my telling him it wasn’t necessary, he was determined, and there was no altering his trajectory once it was set.

While he prepared the lavish spread of steak, potatoes, asparagus, and dessert, I could only watch as he wanted absolutely no help. At that moment, I realized here was one of my personal heroes, a global celebrity, and one of only a handful of people to travel to another heavenly body, making and serving a common guest dinner. That one simple act completely summed up Al’s character. While I’ve gotten to know many important people and celebrities over the years, I can’t see any of them taking the time to make and serve me dinner, let alone treating an ordinary guy as an equal.

Some say a person’s true character reveals itself when no one is watching. One’s character can inspire or discourage others as well as influence how someone interprets and shapes the world around them. Al Worden inspired many because he genuinely believed in people and was willing to freely help whenever asked, and often even when he wasn’t.

However, when observing the behavior of some of today’s leaders in both the public and private sectors, it’s easy to question whether we’ve lost sight of character. Thousands of books have been written on leadership style, but few have been written on character. This may be because character is difficult to define, is seen as old-fashioned, or there’s no clear consensus on what it is or how to assess it objectively. Words like authentic and transparent are frequently tossed around as desired leadership qualities, but are they actually qualities, or the result of a leader simply behaving in a manner consistent with their character?

Some have defined character as the sum total of an individual’s personality traits and values. However, there are limitless possible personality traits, and values are often based on a personal set of beliefs which can vary widely. Take the concept of quality as an example. Most would agree that having good quality is an essential value in the context of producing and purchasing things, yet the degree of quality for anything rests with the perception of the person doing the evaluating. This perception is formed through an assessment of the objective qualities specific to the product in question––the separate elements, features, points of comparison, or components––that help to set it apart.

On the other hand, the thing in question also has subjective qualities––softness, roughness, fit, flavor, and others––that aren’t specific to either the object itself or its observer. These qualities come as a result of the interaction between the thing, the observer, and the environment surrounding them. The difference then between objective and subjective qualities is that the former is based on a sense of measurement while the latter is based on feeling or emotion.

It’s this sense of feeling that creates the perception of quality: a sense of attractiveness, excellence, superiority, and worthiness––attributes that are very difficult to observe or quantify, but much easier to have a gut feeling about. Thus, the value of quality is associated with a thing insofar as it is perceived to be an instrument for achieving some goal or objective.

People are not things, but the quality of one’s character is often determined in the same manner. Whether through regular observation or a single interaction, people will assess another’s character based on their perception of that person’s qualities, and that perception is often based on a number of behavioral habits––actions exhibited on a fairly consistent basis. Habitual behavior is developed over time and is therefore a good representation of character.

While the list is long, I believe character is primarily perceived through these five behavioral habits:

• Authenticity: authentic leaders are genuine, and lead with both their hearts and minds. They walk the talk regardless of the role they’re serving and inspire respect through their actions, not just their words. They don’t need the spotlight and are happy to cast it onto others. They are open-minded, approachable, and often vulnerable. They are aware of their strengths, limitations, and emotions, don’t profess to be something they’re not, and unapologetically do what they believe is right.

• Generosity: generous leaders are grateful, and realize their success is often due in large part because of what others have given to them. They freely give to both people and causes without expectations because they hope for a better world. They live by example, don’t ask for anything in return, and truly care and work to enhance the well-being of others.

• Trustworthiness: trustworthy leaders are honest and transparent, possess personal integrity, and people are naturally drawn to them. Their behavior is consistent and they provide constant support. While they naturally see the best in other people, they are also willing to “tell it like it is.”

• Humility: humble leaders are secure in themselves regardless of their popularity and wealth. They are able to put aside their egos, recognize their weaknesses, and seek and acknowledge the input and ideas of others. They are service-oriented and frequently put others before themselves. In the words of Ken Blanchard, the author of The One Minute Manager, “People with humility do not think less of themselves; they just think about themselves less.”

• Resilience: resilient leaders see failure as temporary setbacks. They have grit, remain positive despite adversity or negative outcomes, and find ways to move forward. They are unyielding in the face of hardship and lean on their relationships with others when necessary to overcome obstacles. 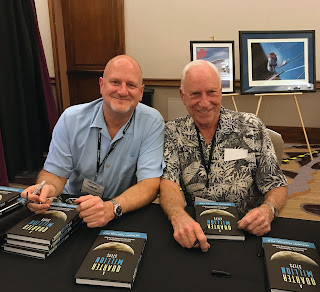 No one is perfect, and developing character is a lifelong journey. For eighty eight years, Al Worden lived a life most of us only dream about. He was a graduate of West Point, an Air Force test pilot, an Apollo astronaut, a global celebrity, and a national hero. Al’s character was developed through his many life experiences and interactions with people.

His character was always on display regardless of whether anyone was watching. Whether it was taking the time to speak to groups of children, presenting to civic and community groups, having lunch with strangers at a fast-food restaurant, or interacting with people on social media, Al made everyone feel like he was their best friend.

He was never concerned about what people thought of him. While many with his celebrity status work hard to put on a great show and create a perception of how they want people to see them, Al exhibited an authentic care and concern for others, which is why he was adored by so many. In the long term, you can’t hide your heart, good or bad, and his was good.

Everywhere Al Worden went, he left a lasting, positive impression. He was exceptionally generous, especially with the one commodity he had the least of: time. He approached life with a thoughtful yet laid-back, almost poetic, mindset. Whether it was meeting the world’s wealthiest people, the leaders of nations, famous rock stars, or a few wide-eyed third-graders, Al would frequently respond, “No big deal. There are no strangers in this world, only friends I haven’t met yet.”
© 2020  Anthony D. Paustian. Dr. Anthony Paustian is the author of A Quarter Million Steps, the Director of Communications for the National Space Society, and Chair of the 2021 International Space Development Conference. He can be reached at tonyp@adpaustian.com.
National Space Society - Reprinted with Permission
Photo of Al Worden courtesy of Mark Usiak

by Dr. Anthony Paustian Author of  A Quarter Million Steps I grew up watching the The Jetsons, a futuristic television cartoon created by Hanna and Barbara in the early 1960s. As George Jetson and his family traveled around in flying vehicles while living and working in buildings that seemed to float in the sky, it was easy to think that anything representing a total paradigm shift from current life had to be light years into the future. However, I recently attended the Experimental Aircraft Association’s annual AirVenture in Oshkosh, Wisconsin. The largest air show in the country, AirVenture was loaded with state-of-the-art military and civilian aircraft and even modern, private sector rockets such as Jeff Bezo’s Blue Origin. But it was the smaller, more experimental aircraft that fascinated me. Despite my Air Force years on fighters (F-111s to be specific - now appearing in museums), I found myself repeatedly drawn to these very personal flying machines the entire week I wa
Read more

Bolts from the original Launch Umbilical Tower (LUT). I’m a collector of sorts, especially when it comes to Apollo memorabilia. There’s something about being surrounded by these artifacts that ignites and inspires my creativity. While window shopping an online space auction recently, something grabbed my attention––two large bolts including washers and nuts. Though most people probably wouldn’t get too excited about a couple of bolts, these were special, as they were part of the original Launch Umbilical Tower used to launch the Saturn V rockets to the Moon. The bolts were huge, about eight inches in length, weighed about five pounds each, and still had portions covered in the original orange-red paint. Seeing these bolts got me thinking about everything that went into putting a man on the Moon. While we celebrate the 50th anniversary of those missions, the focus tends to be on the astronauts as heroes in the same way they’re portrayed in films like  First Man ,  Apollo 13 , an
Read more

Dr. Anthony Paustian
Dr. Paustian has authored four books including "A Quarter Million Steps," which won seven international and national literary awards for best book in the areas of leadership, motivation, and success. Dr. Paustian holds graduate degrees in business administration and design management, as well as a Doctorate in Educational Psychology.